This Web Essentials is positioned as a conference “by developers for developers”.In spite of its unchanged orientation, WE05 was more upgraded or more elaborated than last year's conference in some points. I had two very fruitful days there.

In addition, WE05 Podcasts are available, although they do not cover all of the lectures given there. Podcasts are very epoch-making and allow even non WE05 participants to have a vicarious experience of part of the conference by listening to the WE05 Podcast while viewing separate open reference data.

During the conference period, two night parties were held (only one party was held on the first night at last year's conference). More care was exercised so that speakers could communicate with participants or participants could communicate with one another. Also, lunch time was an ideal place for communication and I am grateful I was able to make some new friends through the parties there. A breakfast party with a speaker (Mr. Tantek Çelik, described later) was held, which was not an event included at the last year's conference. The breakfast party allowed us participants to share valuable time with the speaker.

In technical aspects, I felt, there was not so much I got through this year's conference. But I think I was able to get a lot of motivation and inspiration there. Although I cannot talk about all of the WE05 presentations in detail in this column, I would like to talk about some impressive ones including speakers' profiles.

A key-note speech was given by Ms. Molly Holzschlag, who is the leader of the Web Standards Project, which I'm also on. After introducing herself, she asked the participants some questions including what kind of position and attributes the have. Although design and technology related participants accounted for a larger part of the audience as I had expected, some of the participants had the title of “business analyst.”

In addition, the general profiles of speakers and the host were followed by the introduction of “killer applications” such as Blogs, Wiki, photo-sharing Flickr, various kinds of services provided by Google, and Skype, voice call via the Internet.

She mentioned “Web 2.0,” a vogue-word representing Web trends. She said that it was an aggregate of various technologies. One of the points of Web 2.0 was how people who have different work abilities would cooperate with one another, and she mentioned that the ultimate focus was on results users got. After that, I have heard the word Web 2.0 in a lot of presentations. The word Web 2.0 seems to have been a key word for the entire conference in a sense.

Zooming Out from the Trenches

Mr. Doug Bowman made a quite unique and impressive presentation. He became very famous for his actual achievement of the Web standard compliance of WIRED and is now a design consultant of Stopdesign. His presentation covered the past (the era where the Web is called “Web 1.0”) and present of Web. I hear he was at first asked to make a presentation about a CSS-related subject but he proposed making a presentation about the subject mentioned above.

The internet environment around us appears to be richer and more convenient than before, as seen from changes from wired to wireless, from dial-up connection to broadband connection, and what is more, disappearing storage limits, for example. On the other hand, I am filled with indescribable emotions when I see UNICEF statistics show there are as many as 300 million children who have “no information” in the world.

He ended his presentation with Malcom X's line, “The future belongs to those who prepare for it today.” What he spoke about in his presentation made me think very hard (and worry) about what I should do now as a Web creator and in particular as a professional one.

The next presenter was Mr. Tantek Çelik. He worked on the development of OpenDoc at Apple Computer and the development of the Internet Explorer for Macintosh at Microsoft. At present he is working as an engineer at Technorati, a company famous for its Blog retrieval technology.

He first asked the participants some questions about data archiving. They were “What data do you save in what format?”, “What would you do if you had to change the hardware and software that handled the data saved?” (example: Email client transfer), and so on. After that, the presenter said that microformats did not solve all problems associated with it but that the development of open data formats would help.

For XFN, I have personally created the Japanese version of an automatic creation tool called XFN Creator. If you are interested in the tool, I strongly recommend that you try it.

Designing the Next Generation of Web Apps

Mr. Jeffrey Veen of Adaptive Path already mentioned the importance of Web standards in his book, which was released 5 years ago, titled “The Art & Science of Web Design." All information contained in his book is now open in his Blog. The information is never old-fashioned even now. That clearly shows how well he understands the essentials of Web and how he forms his visions. So, I'm kind of a fan of his. I was very happy I got to talk directly with him at the party he attended.

His presentation was exactly about Web 2.0 as you can tell by its title. Although there are a lot of Web 2.0 definitions, an article titled “What Is Web 2.0” written by Mr. Tim O'Reilly that just came out during the WE05 Conference, will help you to understand the definition of Web 2.0. Mr. Veen mentioned three factors that characterizes Web 2.0, that is, tag, API, and Ajax, and he spoke of some specific examples. He also ended his presentation with two questions: “How should these characteristics be used exactly?” and “How should companies be made to accept resulting technical changes?”.

In the current Web 2.0 era, where the Web functions as a kind of platform, I think, contexts that combine end users with companies are also in a process of diversification. The WE05 presentations made me acutely aware of the necessity of further thoughts and studies about what technologies with which to realize contexts that would meet both users' needs and business goals.

For the many presentations that do not appear in this column, I strongly recommend that you access the WE05 site and view lecture data or listen to the Podcast. Or, please look at photos with WE05 tags on Flickr or access search results of WE05 tag on Technorati and read the many articles written about the Web Essentials. I'm sure you will be able to deeply experience the attraction of WE05 and its meanings.

Finally, the photo below shows the members of the Web Essential Steering Committee (Mr. Russ Weakley and Mr. Peter Firminger of Webboy and Ms. Maxine Sherrin and Mr. John Allsopp of Westciv), which planned the conference and I would like to take this opportunity to express my gratitude to them. Thank you. 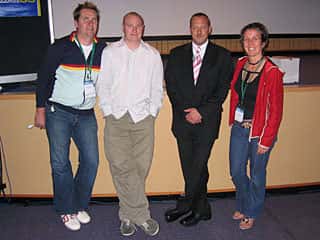 John, Russ, Peter, and Maxine, from left to right