December 8, 2006 Towards the Popularization of Web Standards in the Asian Region

On November 28, I attended the W3C10 Asia event held in Daiba, Tokyo. This gala event was hosted by the W3C's Asian host Keio University to commemorate the 10th university of the W3C, which is involved in the formation of many Web standards. I was fortunate to be included as a panelist in one of the public forums entitled "The delicate relationship between the Japanese IT industry and Web standards" held as part of this event. An overview of the day's events is profiled at "ITmedia Enterprise: The delicate relationship between standardization and the industry".

The delicate relationship between the Web design industry and Web standards

To kick-off the public forum, each of the panelists gave a presentation. In my presentation, first I gave a brief overview of our company and our involvement with Web standards, and then raised the following four points in relation to the delicate relationship between the Web design industry and Web standards. Four points I raised:

First, I noted that, in the context of Japan at least, while there is awareness that Web-standard-compliant Web production is gaining relative popularity, there are insufficient initiatives in place generally in the global context. Secondly, citing CSS2.1 as just one example, I talked about how it takes too long for one specification to be developed from the draft stages through to becoming a recommended standard. In my third point on WCAG2, I explained that there is some doubt and concern about whether WCAG 2 will really be useful for some sectors, which probably stems from insufficient knowledge that WCAG2 is being newly formulated independently of any specific technology and that new concepts not evident in existing, baseline versions are being adopted. Finally, in my fourth point, I explained that there are some things that Web developers are very interested in with regards to the standardization activities going on outside the W3C framework.

Misgivings over the W3C's activities

While there was some overlap here with what was discussed in the points I made on the "delicate relationship" issue above, I raised the following three concerns over the W3C's activities:

Given that we are talking about specifications to be used on the Web, which has a universal presence, it is probably somewhat unavoidable that the formulation of specifications will take some time. However, if the pace of specifications development falls too far behind that of actual technological progress on the Web, then ultimately, we will just end up with a bunch of "unusable" standards. Another important point here is the extent to which the opinions and needs of those who will actually be using these specifications are taken into account in this process. Of course, it goes without saying that there is a need for users to be actively involved in this process (by providing comments on draft versions, etc.), but in light of the language barrier that I will talk about below, I feel that we need a framework in which both sides can more effectively communicate with one another to this end.

Recommendations for the process of specifications development by W3C

Based on the points made above, I put forward the following three recommendations for the W3C specifications development process. All of these have been raised in the past, and I am fully aware that these are all easy to talk about but difficult to put into practice. With all due respect given to the ongoing standardization activities of the W3C to date, my aim in raising the following points was to communicate my feeling that there is a need for the existing standardization process to be revised as we look ahead to the next decade. My recommendations:

How can people living in countries and areas where English is not the official language and who may not be proficient at English (I myself am one of these people) communicate their opinions to W3C in a timely fashion, and conversely, how can the W3C then effectively incorporate the ideas and onions of these people? I think this is an issue for W3C. Given the Web's universality, undoubtedly we need collaboration on an international level by overcoming language and cultural differences, and on a regional level, in Asia in particular, we need to take steps towards resolving this issue in the future.

Over the two days following W3C10 Asia, a meeting held twice a year for just the W3C members, was scheduled to be held, which I, as Mitsue-Links' W3C Advisory Committee Representative (AC Rep), was supposed to attend, but instead I headed off to Korea to attend the SOFTEXPO & DCF 2006 event, where I had been invited by the Korea IT Industry Promotion Agency (KIPA) to give a lecture on Web standards. 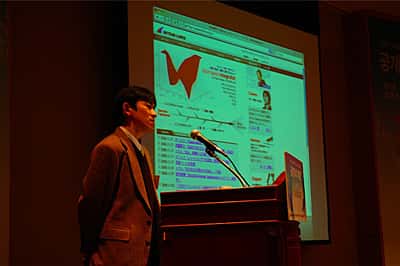 The content of this presentation was more or less the same as the keynote address I had given in Japan in July at the The Day of Web Standards event, but in light of the subsequent emergence of the IE7, I also dedicated some time to talking about accessibility. There were over 100 people in the audience that day who my lecture was simultaneously interpreted for. My presentation went well.

It seems that Web-standard compliance initiatives in Korea have really taken off over the last year, but compared with Japan, Korea still has some way to go in this domain, which became evident to me when I went to a bookstore to check out books available on Web production. There are a lot of websites that only support a particular browser, and at the 2nd Korea Web Standards Day event I attended after I gave my talk, there was a lot of discussion about how Web standards could be promoted to customers and people within companies, and about whether compliance with Web standards will really have any cost benefits. All I can hope is that my presentation provided some positive support and encouragement for Web-standard compliance.

Towards the popularization of Web standards in the Asian region

Here I have briefly reported on the two events I attended, and since October, I have been involved in the activities of the Northeast Asia OSS Promotion Forum. This forum is working on promoting the popularization of open-source software in Japan, China, and Korea, and there are some working groups within this framework involved in standardization and authentication research (WG3), and even one sub-working group (SWG2) carrying out surveys and research into Web interoperability. I have been appointed a member of the SWG2's Japanese committee. This sub-working group is looking at what factors prevent interoperability for Web contents and browsers, and I hope that through these activities, we can make steady progress towards the popularization of the Web standards in the Asian region.