May 22, 2015 Can Lab Results Be Taken Directly into the Real World?

I had the pleasure of attending the ACM Conference on Human Factors in Computing Systems (CHI) in Seoul, South Korea from April 20 to 24, 2015. CHI, held by the human-computer interaction (HCI) branch of the Association for Computing Machinery, is the largest and most prestigious conference in the HCI field. With close to 3,000 attendants this year, the conference was a great opportunity for me to hear presentations and keynote speeches from leading practitioners around the world, as well as to take a few more in-depth courses.

This Year’s Offerings at CHI 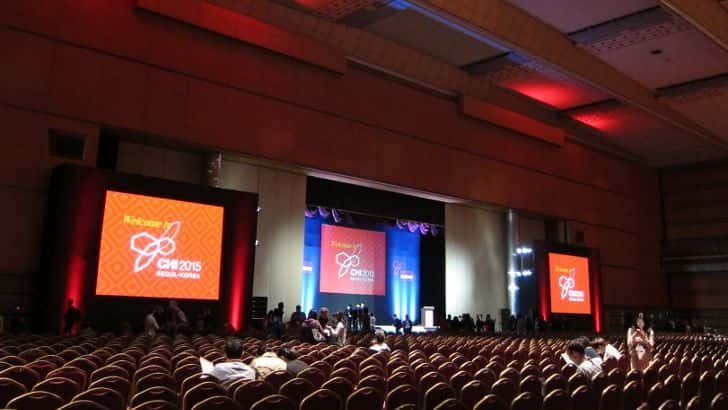 Each year, the conference has a theme, and this year's was “Crossings”, representing the first time for the conference to be held in Asia in its 33-year history. While Asia was not new for me, I was able to encounter people from a wide range of disciplines and backgrounds. The keynote speakers included heavy hitters from Samsung, LG, and Microsoft, as well as an architecture professor Tongji University in Shanghai, and PSY (yes, that PSY, of Gangnam Style fame). Session speakers also ran the gamut, from ethnographers talking about preserving a dying language in Malaysia with touchscreen tablets; to artists using their knowledge of color theory to help meteorologists better visualize ocean currents.

Of course, bringing people and technology together is the core aim of the HCI field. CHI 2015 was an excellent chance for me to see the latest research regarding how people interact with technology, as well as a glimpse into potential future interactions. For example, researchers from the University of Zurich were able to predict when it would be most opportune to disrupt computer programmers by measuring their biometric data (electrical activity of the brain, body temperature, etc.). Another group from MIT created a compact device that could be attached to a user’s thumbnail to be used as an accurate one-handed input device for a smartphone or PC. These and many other research papers showed promising results in lab studies.

First of all, lab tests can be quite limited in the scope of subjects and use cases that can be evaluated. Many of the tests that I saw used university students as subjects, who tend to be quite comfortable with technology, and not necessarily representative of the general population. It’s something to keep in mind when transferring research results to real world products.

Secondly, the tech industry has seen a proliferation of devices that can be connected to the internet in recent years, from smartwatches such as the Apple Watch, to smart TVs that can connect to Netflix and YouTube. This opens the door for device-to-device interactions, in addition to the pre-existing user-to-device interactions. We will need to figure out how new technologies will be adapted for real world users and situations, and not just the tech-literate university students under controlled lab conditions.

Of course, don’t get me wrong. Lab testing is great in that it allows us to see what we are capable of achieving. It lets us speculate about what we might actually be doing in the future, and sometimes, it even comes true. I just believe that some thought needs to be put in to it before lab results can be brought into the real world.

CHI 2015 was a great chance for me to see the latest advances in the HCI field, as well as get to speak with practitioners from around the world. It was very inspiring to be able to see the latest research results, and to speculate about the possible interactions between users and technology. In addition, as a practitioner within the industry, attending CHI gave me a chance to re-acknowledge that technology cannot be used simply for the sake of technology. We must be aware of who the users will be, in addition to the situations under which said technology will be used, before it can be implemented.

The CHI 2016 will be held in San Jose, California. I would urge anyone who is interested to attend.