November 27, 2015 An International Internship – Studying the different ways of working in the UK and Japan 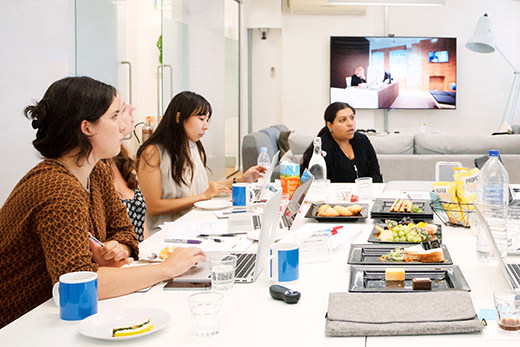 In July of last year, I took part in a 3-month summer internship at Sutherland Labs in London. As a designer for the User Experience (UX) team at Mitsue-Links, Tokyo, my goal for the internship was to learn about the differences in design and research between Japan and overseas.

The UX team at Mitsue-Links does web-based usability research, testing and optimization for both domestic and international clients (currently, approximately half of our projects are from overseas). Similarly, Sutherland Labs offer web-based research and design services in London. At both companies, designers and researchers work side by side on projects.

In this column, I'd like to talk about the 5 most interesting cultural differences in the work place that I discovered between Japan and the UK.

In London, there was a phrase that all the designers around me kept saying – “less is more”; the less there is of something, the better it is. I felt that everyone had adopted a minimalistic approach to design. Proposals, webpage mock-ups and even icons, everything was created to look and feel elegantly simple.

After my internship ended, my colleagues back home often asked me, “So what are the traits of overseas website design?" Compared to Japan, I feel that the biggest difference is the aversion to cramming in as much information as possible above the fold. In Japan, including as much detailed information as possible on a page gives Japanese users a sense of reassurance.

When looking at English language websites, especially those from the US and the UK, they feel more elegant than the Japanese ones I'm used to. To me, the simple elements, combined with the generous use of white space and dynamic photographs, were what made the webpages feel more sophisticated and visually appealing.

At Sutherland Labs, when my designs became overly complicated, I often received helpful feedback like, “There's a bit too much going on. Let's take some stuff away.” Having my work critiqued by designers in London, I feel that my visual sense and design skills have really been honed; I now feel I can better understand the thinking behind the different aesthetic styles between Japanese and English websites.

2. Everyone loves chatting! But work still gets delivered early. How?!

Compared to the customary quiet that goes with working at a Japanese company, everyone in the London office loves to chat.

The interesting thing is that with the amount of conversation going on, work still gets done. So how can things get finished so quickly? The design team at Sutherland Labs were skilled at seeing the big picture and at making design decisions based on their understanding of a project as a whole. Consequently, I felt that from the moment people started designing, little time was wasted going back and forth to confirm and re-confirm the requirements of a brief.

In Japan, proceeding cautiously and carefully, and constantly going back to check against requirements so that no mistakes are made is a highly valued work trait. However, I want to embrace the powerful decisiveness and focus I experienced during my time in London.

At the start of a branding project, the design requirements and their priority, the project schedule and who will do what is quickly decided and shared in one document. Even if the project involved working in a medium that no-one had experience in, if it was something that was needed to complete the project, the team would quickly work to expand their knowledge. For example, they would take their MacBooks in and out the office to consult with potential vendors about the plausibility of their design ideas before returning with a proposal to present to the client. This is vastly different to working in Japan, where the freedom to move in and out of the office with a work computer is highly restricted.

Working alongside the local designers, it was this powerful autonomy and flexibility that I saw up-close which got me excited, and inspired me more than anything else. It got me thinking about the risks inherent in working for large organizations in Japan where the employee's role is often fixed, limited and fragmented. Subsequently, this provided limited opportunities for professional development. In such a landscape, I wondered what could be done to help web designers move forward in their constantly evolving profession?

4. Communication is about two-way conversation

In workshops and seminars, everyone exchanges ideas and opinions

During some of the client workshops I attended in London, I was really impressed by the team-play I observed between Sutherland Labs and their clients. Rather than the Japanese style of one-way communication – where the client would come to us with their specific needs then simply wait for results to be presented – both the client and Sutherland Labs worked together as a team to solve challenges. This reciprocal style of communication, where different parties frequently exchanged views, is apparently the norm not only in the western workplace but in seminars and university lectures.

At Sutherland Labs, I was privileged to experience this two-way style of conversation first-hand when I was asked to give a talk about the differences I had observed between research in the UK and in Japan. Throughout my informal presentation, the local designers and researchers asked me many questions and what was originally a simple talk turned into an extremely engaging discussion where I also learned many things.

Even from just attending a meeting, I experienced something new and exciting. Comments and ideas kept flying around the room, and even the youngest and least experienced members on the team were free to openly contribute and express their opinions. This is in stark contrast to the hierarchal system in Japan, where everyone is always conscious of what they should or shouldn't say or do based on their rank and seniority. At Sutherland Labs, once someone joins the company, they are regarded as a full-fledged member of the team and are encouraged to actively participate in conversation to generate new ideas. Unlike Japan, there is no “new graduate” system, where employees are trained from scratch and are awarded seniority based on their length of service.

The friendly greetings of “Hey, how's it going?” or “Oh, I love it” when someone walked past or glanced at my screen were everyday exchanges that happened throughout the work day. While on the surface, the resulting small-talk took time out of designing, it was these casual conversations that shaped how my work progressed and led me to find unexpected solutions to a design problem. Having experienced this productive yet open atmosphere in London, I have also come to enjoy chatting with my teammates more back home in Japan. 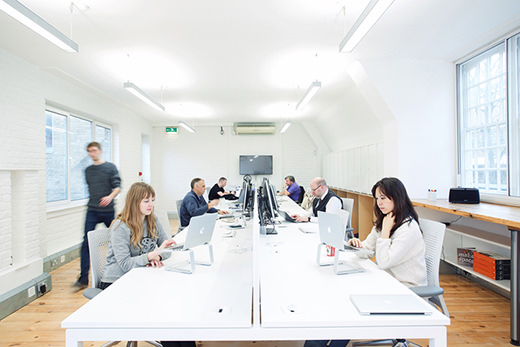 The 5 points above are what fascinated me the most during my internship in London. More than any difference in design techniques or tools, it was the different ways of thinking and working in the UK which had a lasting impression on me. More than learning about the “what” of things, it was the “how” that I took away from my internship experience – How to empathize with both clients and teammates in order to tackle a project together.

It goes without saying that if a country is different, its people and culture are also different. So I'm unsure if the 5 different ways of working I described above can be wholly and successfully integrated into a Japanese work environment. However, I hope that by sharing my experiences here, my Japanese colleagues can be inspired to find ways to ensure that a project runs more smoothly. I hope that by trying a different approach as I have, work can become more enjoyable and engaging in a Japanese office, no matter the industry.