The IA Summit, the preeminent global conference on information architecture, is held annually in the North America area. This year it was hosted in Vancouver from 22 to 26 March. Continuing from last year, I continued my participation.
This year the IA Summit theme was “Designing for Humans.”

Over three days, there were 5 keynote speeches (including the closing plenary) as well as 50 sessions categorized into the following three areas:

The topics covered under category No.3 highlighted a contrast between conferences held in Japan and those hosted overseas. This year, through sessions such as Alan Cooper's, known as the father of Visual Basic, “Ranch Stories”, Amber Case's, of MIT Media Labs, “Designing Calm Technology”, Bram Wessel's “Was Nate Silver wrong? Click Here for Why! The Crisis of Modeling in an Era of Clickbait, Truthiness, and Fake Content”, and Lutz Schmitt's “Privacy by Default: A Concept for Privacy in a World With The Internet of Things”, there was a broad perspective on the relationship between humans and technology in society.

In this column, I will pick-up two interesting trend-related keynotes.

Alan Cooper, who owns agricultural land in the Marin County area of California, discussed, from his own experiences as a farmer, key ideas for the software industry from the food industry's perspective in his keynote entitled Ranch Stories.

The agricultural systems that produce our daily food, the software we encounter every day, are both related. They provide the basic infrastructure for the development of a rich society and culture.

Cooper's quote “people love your product for what it is, not for what it cost”, declared that the consumer food industry is changing – that there is a shift in perceptions from those of commercialism to those of valueism. He argued that when people today are given the choice between a mega-capitalist, mass-produced $1 hamburger or a family-owned farm's lovingly grown $3 head of broccoli, they are selecting the latter. He argued that this move away from industrial food toward more locally produced, sustainable food is the future for agriculture. He stated that this form of agriculture is what makes us human.

Cooper stated that he wanted the software industry to think in a similar manner to the food industry - in other words, that profits are born from the quality of products. He also pointed out that it is difficult to develop superior software from teams managed under large -scale management structures – that simple, flat and devolved is preferable. 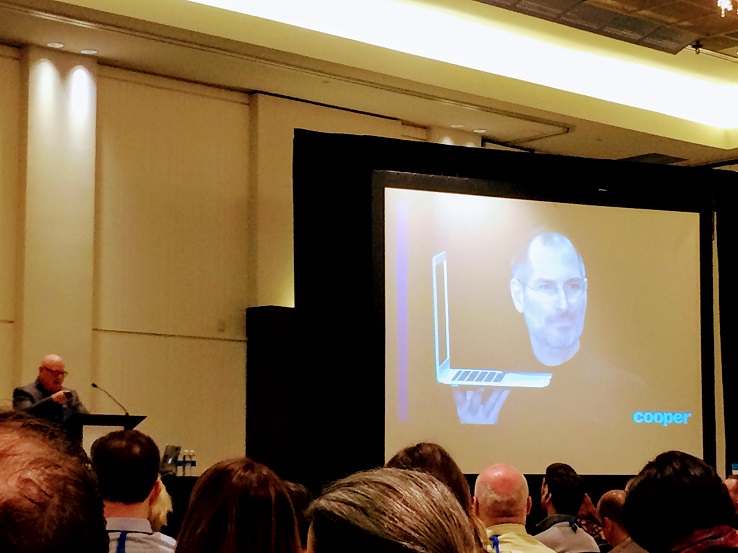 He ended by stating farmers seek to maintain not only their livelihoods but also the environment, software developers should have similar thoughts – that is they should not follow the quick-profit, industrial path but rather a path where the user and sustainability are the core. He said that “profit is the by-product of quality” and that developers should think in the same way as craftsmen. The venue erupted into a standing ovation.

Future interfaces will seamlessly blend into daily life, they will not attract attention except when necessary

In her keynote, Amber Case stated that the concept of Calm Technology, which was originally proposed by Mark Weiser and John Seely Brown at the Palo Alto Research Center in 1995, has the following properties:

“Rather than approaching listeners from the environs; the music immerses people, envelopes the listeners with space and depth” - this is a definition of ambient music, a term coin by the British composer Brian Eno, and I feel that this sense of ambient awareness is one of the important factors in Calm Technology. As a side note, it's interesting that Brian Eno composed the Windows 95 startup jingle in the same year in which Calm Technology was proposed.

Presented as examples of calm technology were an electric kettle, a sign on a toilet door denoting use, lighting brightness that changes with the time of day/weather, etc., - basically, something that works in the unobtrusively in the background adjusting and enveloping humans while they remain almost unaware. Case asserted that Calm Technology would realize an environment in which people could achieve objectives with minimal activity and mental cost. 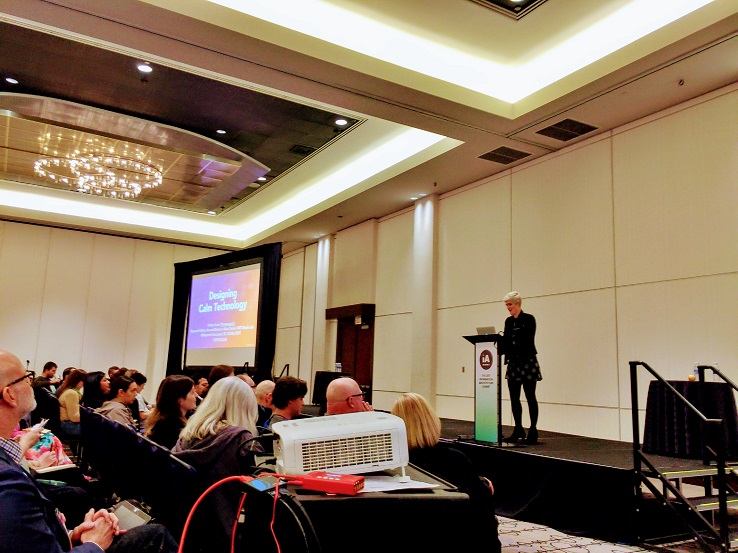 According to Cisco Systems, by 2020 there will be 50 billion internet-connected devices.
In the IoT era where smart, Internet connected devices become ubiquitous, often there is much focus on the development of the device itself, however, people, the actual users, are at times being considered as an afterthought. We must therefore prioritize the human user wants and needs and through the deployment of Calm Technology to ensure that they can have a more seamless and most convenient life as possible.

I hope that you enjoyed reading this column. If you are interested in information architecture and user experience design in Japan, please feel free to be in touch.