Differences and universality of sensibility

“People are similar, yet different...”

A long time ago, a friend made this casual remark when we were discussing how people perceive the same event in different ways. We usually relate to other people around us in accordance with some set of norms or common sense, and my friend's words startled me because just at that moment, I was pondering how we would agree on these norms and common sense. Finally, the remark my friend made convinced me that norms and common sense change depending on the kind of person under consideration and the kind of situation you are in.

On another occasion, I heard the following story. A Japanese high monk was attending a dinner party where the dignitaries of various countries had also been invited. During the dinner, the food that was served was completely Western style, and the monk was not familiar with the appropriate table manners, as it was the first time that he had come across such food. He thus took the soup bowl in his hands, raised it above his head, said a prayer in gratitude and respect for the food, and drank the soup directly from the bowl as he was accustomed to doing at his temple. The dignitaries from the other countries who witnessed this were extremely moved by the beauty of the monk's action.

While on one hand, there are situations where one is made aware of the differences in the sensibilities between people (even within the same country and culture,) there are also situations where some notions of universal beauty can evoke sympathy among the people of diverse cultures and habits. I believe that the ability to ascertain the behaviors or habits that should be altered depending on the situation and those that can be shared and are commonly applicable to all situations is an indispensable skill, not only in personal communication, but also to improve the efficiency and effectiveness of product development processes.

User Friendly 2008 was hosted by UPA China and held at Shenzhen, a special economic zone in China, over a period of four days between October 24th and 27th this year. Owing to my previous business relationship with Mr. Daniel Szuc of Apogee Usability Asia Ltd., who is also a board member of UPA , I decided to participate in this event as a representative of Mitsue-Links.

Although the event was hosted by UPA China, the objective of the conference was to popularize usability in the wider Asia region, and the speakers and workshop facilitators comprised a cosmopolitan crowd, with people coming from Asian countries including China, India, Korea, and Japan, in addition to those from Oceania, North America and Europe.

Since I have always been interested in the influence of different cultures on website design, I decided to participate in the workshop entitled “Homepage Usability” that was being facilitated by Mr. Daniel Szuc. On viewing the Chinese websites, as a Japanese person, I felt that the large amount of content, colors, and animations that were typically used in a single webpage was reminiscent of the bustling downtown in Hong Kong. As a result, I became interested in understanding the kind of websites that are considered “easy to understand” and “attractive” by the Chinese. 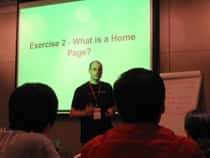 At the workshop, we discussed the pros and cons of the existing websites of several mobile phone service companies; subsequently, we developed a prototype website of a hypothetical mobile phone service company based on the outcome of the discussions. The participants included a number of young Web designers from China along with some people who were in charge of designing global portal sites.

Contrary to my initial expectation, the results of the discussions and prototyping led me to understand that Chinese people also prefer simple and clear designs. When I conveyed my earlier observations to the Chinese participants, they responded that while it is true that many Chinese websites are lively, it simply reflects the fact that users are accustomed to this style and does not necessarily mean that they find it easy to understand. In other words, simpler Web designs are preferred, but there is also a high tolerance for complexity. However, the extent of the workshop was limited to creating a wireframe for the prototype website, and if colors and content had been added to the wireframe, I may have also been able to note the cultural differences in taste and sensibility.

Globally standardized layouts, colors, and fonts are often used in the websites of multinational companies as part of their branding strategies. One often hears of cases where a guideline developed in one country is not well received in other countries. Some companies have more flexible design guidelines and incorporate localizations that match the tastes of the local users, for example, by adjusting the brightness and hues of the corporate colors and modifying the range of the colors being used.

In an attempt to globally expand businesses, it would be difficult to ascertain—without heeding the voices of the target users—the elements that are commonly acceptable to customers worldwide and those that should be flexibly modified, instead of making assumptions and impositions. There is an increasing need for investigations aimed at the effective localization of products within the usability investigations that are performed at Mitsue-Links. Moreover, it is strongly recommended to incorporate product development processes to reflect the voices of the local users, in order to provide products that will also be appreciated by the users from foreign cultures.