From 18 to 21 March 2014, I attended the world's largest international conference in the field of assistive technology, the 29th Annual International Technology and Persons with Disabilities Conference (CSUN 2014), in San Diego, California. In this column, I will share my feelings on CSUN 2014 participation.

CSUN is an abbreviation of California State University, Northridge, a university with a distinguished Center of Disabilities and the organizer of the “International Technology and Persons with Disabilities Conference”; the moniker CSUN is now synonymous with the conference. The three-day symposium, now in its twenty-ninth year, plays host to a number of lecture sessions as well as demonstrations of the latest accessibility related products and services.

At this year's CSUN, I hosted a session entitled Accessibility and the Power of CSS: Disparities between Ideals and Reality.  In the session, I took up the issue that HTML semantics are not being conveyed by browsers to assistive technologies due to the influence of CSS. Almost all of the seats were taken; this made me feel very grateful that such a large number of people are interested in the topic. 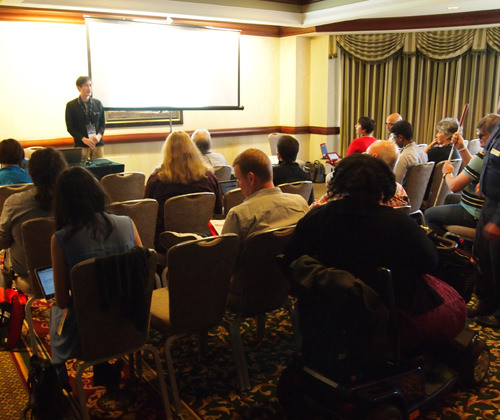 The presentation timeline spanned a period of six months – the outline of the proposed session was submitted in October, then selection confirmation mailed in early December, followed by the actual presentation in late March. During my preparation for the session, it was necessary to continuously confirm and re-confirm the situation regarding browsers and accessibility in order to recognize any positive or negative trends and developments. This is because I believe continuous and rapid change to be a unique characteristic of this field.

In addition to presenting at this year`s CSUN, I had the opportunity to attend several sessions related to web graphics and web formulas. The main discussions on graphics were around SVG (Scalable Vector Graphics), whereas the talks on formulas were related to MathML (Mathematical Markup Language). Some assistive technologies and browsers are already promoting the support of both, and during the sessions screen readers were being used to demonstrate.

What I considered even more important was that the browsers dealt with the graphics or formulas natively. In comparison to bitmap images, it is possible that browsers and assistive technologies expose much more information.

Furthermore, there were discussions in the graphics sessions on content producers with knowledge of the actual data creating graphs using SVG as this allows the embedding of data in the graphics. This is good for accessibility, search and the reuse of data. In addition, in the formulas session a demonstration was performed in which users could interactively navigate elements by configuring formulas. The formulas` elements could be recognized by browsers and assistive technologies.

There remain some challenges with SVG and MathML, however, in the future, it is anticipated that through leveraging the technology it will be possible to create more accessible content.

This time, there was another issue which caught my attention. It was the distinction between global issues and local issues. In addition to my own speech, there were several other sessions at CSUN 2014 that centered on the theme of information not reaching the user despite creating content with standard technology. The problems were cited as browsers or assistive technologies not properly supporting standard technologies. However, in these sessions the presenters announced workarounds which could address the problems.

This information is beneficial, however, in many cases the presenters based their work on an assumption that the browsers and assistive technologies used in their respective local areas had global adoption. At the time of writing this column there are several major browsers with global adoption rates, however, use of principal assistive technologies, such as screen readers, differ depending on the local region. For that reason, it is likely that some of the content and advice announced in the sessions will not be applicable to all the participants` local conditions.

Rather than individual local workarounds, I believe it is important for browsers and assistive technologies to support standard level technologies independent of regions. In addition, I felt that, as the problem is a global issue, session presenters would be more accurate in saying that their solution is regional but that it contributes somewhat toward solving global accessibility issues.