I participated in User Experience Hong Kong (UXHK), held in the Kowloon area of the city, on 24-25 February 2017.

This event, now in its seventh year, attracts participants from not only Hong Kong but other Asian nations including Korea, Singapore, The Philippines, Taiwan, Malaysia, as well as Canada, Australia, the UK, and Germany etc. UX Hong Kong attracted around 400 participants and, as many are involved every year, there was much openness and excitement.

In this column, I'll give a brief overview of the sessions I attended.

Bill Albert's session titled “moving your UX career to the next level” provided an overview of the “UX areas of focus” as well as a discussion on how to develop a career in UX - with the focus based around five key steps.

During the presentation, Albert exclaimed “your career is about people”, these words resonated. The session provided me the opportunity to reconfirm that the objective of UX is to enhance users', or “people's”, experiences, and that throughout the UX career growth, it's important to continuously learn from “people” as successful projects are achieved through positive “people” collaboration.

Falling in Love with the Problem, Rather than the Solution

Andrew Green, in his session “falling in love with the problem, rather than the solution”, argued that rather than solutionism, which focuses on finding solutions, it's important to first consider whether problems themselves are worth resolving.

Citing Airbnb as an example, Green stated that the problems of each phase of the customer journey should be tackled in an order of priority beginning with the largest problem. He then shared the following formula for ascertaining problem size, “problem size = importance - satisfaction.” From the perspective of IA, I was very much in agreement with this way of thinking.

In Martin Bulmer's “designing systems for experts” session, he argued that as specialist business applications – such as CRM systems used by sales departments, loan systems used by banks, and interfaces used by call centers etc. - are to be used by expert professionals with specific training, as opposed to a public-oriented website, a customized, unique approach to the UX challenge was necessary.

For example, in the case of a business interface, which isn't intended to be used by the public, experts, to a certain extent, aren't interested in the UI because the system and tasks to be performed are specific to their role. Furthermore, Bulmer noted that it's often difficult to create prototypes, perform user tests, and organize meetings with such experts, therefore, advice and tips to resolve such issues were shared.

A key point was that we shouldn't assume the application target users are all experts, rather it's necessary to consider non-professional who'll become experts in the future - therefore, existing training manuals should be used as a point of reference for UX design.

The Tricks of Design Decision Making

Cornelius Rachieru's “the anatomy of design argument” provided an overview of how to deal with project design disputes.

Like many other disciplines, design too has political aspects. Therefore, to avoid disputes or any instances of the Dunning-Kruger effect, we were told that it's important both the UX and business analyst sides understand the other party's theories, ways of working (such as the UX process following a winding and unpredictable path that over time becomes much clearer, as illustrated by Damien Newman's Design Squiggle), and interpretation of survey results, to then work together on optimum solutions. 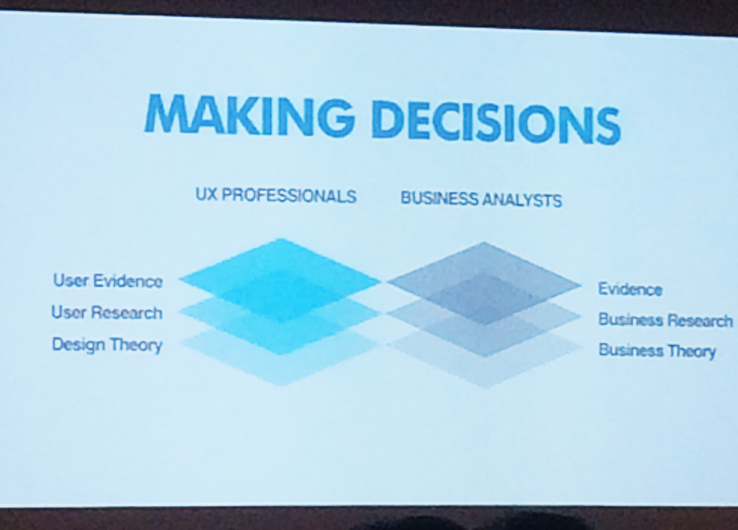 When making design decisions, it's important to adopt an open mindset so that, in addition to the design principles, the right choices are founded on the outcomes of user surveys (user interviews and ethnographic research), and user testing of prototypes, etc., together with the business analyst tools such as focus group investigations and JAD sessions.

Furthermore, Rachieru noted that differences in the project participation timing of both sides was proportional to the failure rate; therefore, he argued that delays of over two months should be avoided as the risk of conflict rises to over 50%.

Human-Centered - To Date, From Now

The main keynote was Jesse James Garret's “designing the designer.”

Garrett argued that as UX careers don't follow a straight path but rather zigzag, practitioners should be aware of the adjacent possible; research thoroughly, for designing without is akin to completing a jigsaw puzzle blindfolded; and should understand context, details, as well as have an interest in systems, technology, organization, people etc.

A panel discussion on the theme of making work more meaningful, considered how to convert purposeless, stressed, “sleepwalking” employees who constantly sigh into employees that are engaged, committed and sparkle in their roles.

A key takeaway was that to ensure all project members are aligned and working together for a common goal, personas and customer journey maps are effective tools for clarifying and sharing objectives. Furthermore, as people tend to remain in their current business/professional domains due to a sense of fear of the unknown, it was noted that for fresh challenges and to innovate people should venture outside of their comfort zones – doing this would lead to more meaningful work and better client solutions. Regarding myself, I feel that it's important to move beyond the sphere of IA and focus on UX and various other areas to ensure a greater understanding of the bigger picture.

UXHK is great for people interested in learning more about UX fundamentals as well as those who want to expand their UX knowledge from a global perspective. I am planning to leverage the acquired insights to deliver projects that sparkle in the future.